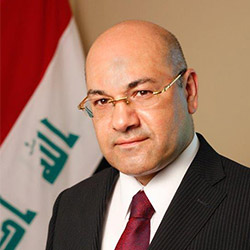 Lukman Faily (born 1966) is an Iraqi diplomat, Ambassador Plenipotentiary and Extraordinary. He is considered as one of the most prominent political thinkers in Iraq. He served his country as Ambassador Extraordinary and Plenipotentiary for Iraq since 2010 for Iraq to the United States of America, Japan and currently in Germany. He has the distinction of being a unique spokesperson for Iraq in international forums and high-level US circles, such as Congress, research institutions, the academic and business community.

Ambassador Faily has been a high-profile spokesperson for his government and Iraqi affairs, engaging with various government officials, academia and think tank communities. Regular appearances on English and Arabic TV and radio news and particularly active on social media, regularly writes political articles to a wide of Iraqi and international publications. Frequently speaks
at public events in Iraq, Washington and across the United States, United Kingdom and elsewhere. Ambassador Faily lived in Iraq and the United Kingdom and served as a trustee of several Iraqi NGOs and a strong advocated for democracy, dialogue, development and rule of law in Iraq.

He is married and is the father of four boys and a girl. An avid runner, Ambassador Faily participated in a number of marathons including Tokyo in 2012 and 2013, and in the Boston and New York Marathons in 2014.

Ambassador Faily has also published many papers, articles in many western and Iraqi media out lights and newspapers.